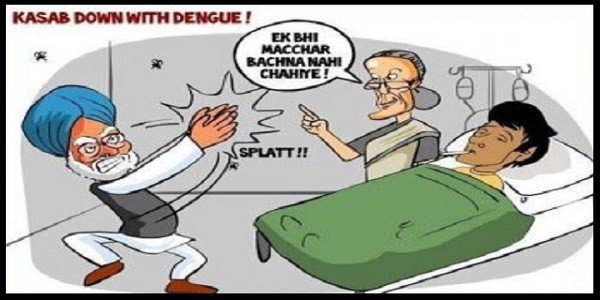 MUMBAI: A RTI filed earlier this month has revealed that Pakistani gunman Ajmal Kasab died of dengue and had not been hanged as claimed by the Indian Government. It has now been revealed that he was down with high fever days before he was ‘apparently’ hanged. Officials at the Arthur Road jail, where he was lodged confirmed that his health had deteriorated and also that he was treated by Dr.Rohan Naik, the doctor who treated Yash Chopra with the same illness forever.

The RTI has also revealed that a team of doctors from the JJ Hospital, who used to regularly visit the jail to taste the food served to Kasab had advised the doctors attached to the jail on Kasab’s treatment to shift him to a 5 star corporate hospital immediately and the Dean of JJ Hospital Dr.Arun Swaminathan had said, “Enough of biryani plates, its high time he now gets platelets”.

Scared for his own life & paranoid after watching ‘Jab Tak Hai Jaan’, Kasab had written a letter to the Pakistan Embassy in Mumbai, a copy which is available with The QuackDoc seeking immediate intervening on diplomatic grounds. In desperate attempt to avoid Dr.Naik’s treatment, Kasab had threatened to expose the links of the ISI & Pakistan Army with the Taliban, Indian Mujahiddin & other terrorist outfits. Pakistan had also complained to the UN alleging India to be testing biological weapons on its captured citizens.

In an exclusive interview with your favorite medical news channel, Indian Prime Minister Narendra Modi said, “At least our mosquitoes were fair, secular & democratic and believed in immediate justice. I’m sure the Indian mosquito will get to other terrorists sooner than the Indian law. It is epic news that Kasab dies of Dengue. Since the government was so keen on keeping Kasab alive, the mosquito did their best to kill him. Machhar ke haath bahut lambey hotein hain.”

In the wake of the news, ‘Aam Admi Party’ President Arvind Kejriwal has pledged support on social networking sites for mosquitoes to at least get Bharat Ratna or Param Veer Chakra for their heroic act and also to be made the national insect. ‘The Brave Indian Mosquito’ Facebook page has gone viral and already crossed more than a 4 million fan likes in last 2 days since we at The QuackDoc first broke the news of Kasab testing positive for Dengue & succumbing to it.