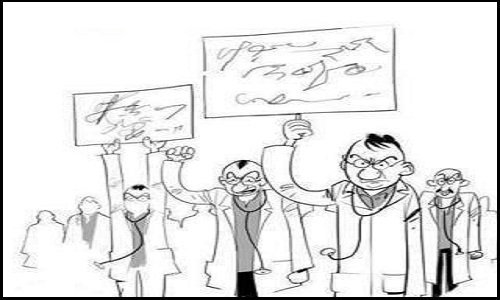 People in general, both old and young have now become more health conscious sweating it out while stalking the opposite sex in the gym or at jogger’s park, resulting in a decrease in the number of future potential ‘customers’ as pointed out by a cardiologist who did not wished to be named. “Earlier I used to admit panicky patients with gastritis in ICCU, starting them on placebo IV drips and discharging the next day after running them on all tests including all routine, Malaria, Dengue, Widal, Triple H  Hepatitis B &  C, HIV), Urine and Stool for culture and sensitivity making some good money but there has been a decrease in number of patients after movies like Bang Bang, Bhaag Milkha Bhaag, Om Shanti Om, Ghajini, etc and I sit idle most of the time now”, said famous cardiologist Dr.Hriday Rog with a sad face.

Some doctors agreed it was wrong to single out actors alone and over the years, high profile elite like politicians and cricketers too have added to the doctor’s woes. In the past, Congress President Sonia Gandhi went to the US for glycerin enema after suffering from constipation claiming she went for some ‘confidential’ surgery, Amar Singh flew off to Singapore to start his own Kidney racket, Virendra Sehwag went to Bangladesh for his alopecia (Baldness) and others alike too should be held responsible. Many claim it is nothing but a cheap publicity stunt on the part of the wannabes to grab the limelight.

When The QuackDoc news crew reached the spot, hardly could they make out what the fuss was all about (because of the secret handwriting on the placards) until they saw the doctors burning effigy of Hrithik Roshan and beating Ghajini with slippers. This angered Shah Rukh’s good friend Salman Khan who tried running over the protesting doctors, this time in his Caravan. Everyone was seriously injured and Salman has been arrested, again.

Support poured in on online forums for the protesting doctors from Cardiologists and Pharmaceutical Companies manufacturing ‘Statins, Ecospirin and Clopidogrel’ and medicated stents from all over the country. They have warned that the day is not far when like the ink on Baba Ramdev’s face or the slap to Sharad Pawar in past, a frustrated doctor would throw a pint of blood on some actor/cricketer/politician’s face during their press conference.