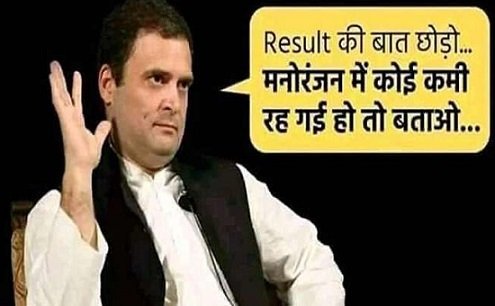 New Delhi– In a major embarrassment for the Congress party which may be considered even more shameful than their much deserved debacle in the Lok Sabha election, Rahul Gandhi’s pediatrician Dr. Amit Shah in an exclusive interview with The Quackdoses has revealed that the 48 year old comedian still suffers from enuresis and breath holding spells.

Enuresis, also known as bedwetting or urinary incontinence is an inability to control urination, often referring to people who are old enough to be able to exercise urinary control. Breath-holding spells are the occurrence of episodic apnea, possibly associated with loss of consciousness, and changes in postural tone usually precipitated by anger or frustration. Both these are common childhood conditions, especially among young children and the most common reasons parents ask for medical help.

“I have been seeing him ever since the disaster was born. Most of the wealth that was amassed by the Gandhi’s after looting India over the last 6 decades has been spent on seeking treatment and buying diapers for Rahul Baba. I’m sick of him emptying the jar of toffees at my clinic for other pediatric patients and also playing doctor-doctor using my stethoscope with his ‘chamchas’ every time he visits for a checkup. His enuresis is so bad that he wets in his pants on laughing while watching videos of his own speeches, and holds his breath even on seeing his nephew Raihan (Priyanka Gandhi’s son) sucking on a lollypop while he doesn’t get any”, said Shah.

The revelation has left the congress scion totally devastated so much so that he offered to quit as Congress President in the CWC (Congress working committee) meeting today and decided to not participate in any more stand up comedy shows (much to the relief of the already battered Congress), along with suing the doctor for breach of trust and patient privacy.

“I’m left with no money, I have no girl, and everybody ridicules me. I’m beginning to feel like a medical intern / houseman now. She has permanently derailed my prospects of ever getting married”, Rahul tweeted after the interview which went viral on social media.

Taking swift action, Prime Minister Modi set up a committee and ordered for a CBI probe to investigate the source of funding for Rahul’s medical bills and diapers.