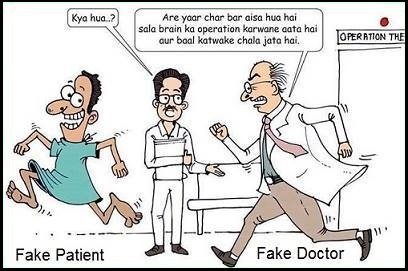 Mumbai: The district administration and a task force of ‘pandus’, formed under Quack Establishments Act, on Friday arrested a quack Dr. Asaram Chaalu for suggesting immoral treatment options to a young female patient suffering from infertility.

Chaalu, who claimed to be a gold medallist in ABCD, actually had studied only up to 10th, and prescribed medicines to his patients by referring to medical literature online. The police refused to accept the ‘Chai-Pani’ he offered to internally sort out the matter and have registered a case. His clinic was equipped with a sphygmomanometer (blood pressure measuring instrument), which was seized along with a stethoscope and other equipment.

“I am innocent and the charges might actually be against a different Asaram. I have completed ABCD- Any Body Canbe Doctor, which is a 6 months paramedic course offered by Bihar University. When most MD medicine people can claim to be Cardiologists and Diabetologists which are super speciality DM degrees, why am I being framed for just claiming to be a family physician? They all should be arrested too”, he shouted in anger as he was being taken away.

While the news has spread like wildfire in the medical community, Dr. Daruwala who was called for his psychiatric evaluation revealed, “He became delusional after watching the movie ABCD 2- Any Body Can Dance and came up with a similar degree. We commonly see such symptoms in frustrated MBBS graduates who do not get admission to PG courses even after repeating for 2-3 years and make up such unheard specialization degrees when they start their practice in small towns.”

Taking note of the ‘true’ revelation by the quack regarding MD medicine doctors, MCI has promised a crackdown on such fake cardiologists and diabetologists soon.