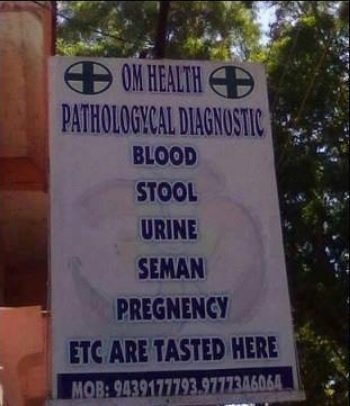 Mumbai: In an astonishing study conducted at the Quackdoses Multispecialty hospital which has left the medical fraternity perplexed, it was found that most Indian patients are unhappy when their health-check package report comes normal, and all their parameters are within normal limits.

With clinical medicine now becoming diagnostically driven and increased health awareness among the general population, people often avail the comprehensive health packages. These packages are marketed by hospitals and labs in such a manner that all the various parameters of a particular test are shown as separate standalone tests, so that the patients can be fooled to believe that they are getting report of 50 tests for the cost of 5.

In an exclusive interview with the Quackdoses, patient Kanjus Wasooli said, “After fasting for 10 hours and coming early morning to get the tests done, is it wrong to expect at least 1 abnormal report, highlighted in bold – be it raised ESR, vitamin deficiency or size of the RBCs? I was waiting to send the 21 page PDF report to my doctor on Whatsapp, so that he could search and brief me for the abnormal parameters. I’m an optimist, and I look for the positive in the negatives, be it in life or in medical reports, except COVID PCR report.”

Doctors have meanwhile complained that they prescribe only 3-4 tests as clinically indicated, but patients bring pages of random reports on follow up OPD visit, mixed with medical bills, and also question them on the reference interpretations written below each page. When the reports come normal, patients often allege that the doctor has tie up with the labs and receives kickbacks.

Unconfirmed sources have now claimed that hospitals and labs have unanimously decided to give reports with deficiency of multi-Vitamins, so that patients can then be started on the placebo of ‘takat ki goliyan’ for few days, leading to better patient satisfaction.