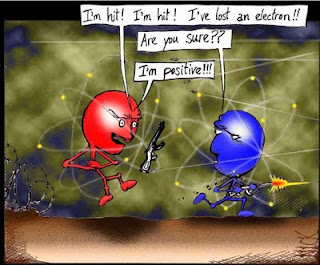 NOTE– NOT AN ORIGINAL PIECE OF WORK…..THE FOLLOWING IS ONE OF THE MOST HILARIOUS THINGS I’VE EVER COME ACROSS….HAD READ IT ABOUT 8-10 YEARS BACK…LOVED IT, SO SHARED IT.

One night when his charge was pretty high, Micro-Farad decided to seek
out a cute little coil to help him discharge.

He picked up Milli-Amp and took her for a ride in his Megacycle. They
rode across the Wheatstone Bridge and stopped by a Magnetic field with
flowing currents and frolicked in the sine waves.

Micro-Farad, attracted by Millie-Amp’s characterisic curves soon had
her fully charged and proceeded to excite her resistance to a
minimum. He gently laid her at ground potential, raised her frequency
and lowered her reluctance.

With a quick arc, he pulled out his high voltage probe and inserted it
in her socket, connecting them in parallel. He slowly began short
circuiting her resistance shunt while quickly raising her thermal
conductance level to mil-spec. Fully excited, Milli- Amp mumbled
“MHO…MHO…MHO”

With his tube operating well into class C, and her field vibrating
with his current flow, a corona formed which instantly caused her
shunt to overheat just at the point when Micro-Farad rapidly
discharged and drained off every electron into her grid.

They fluxed all night trying various connectors and sockets untill his
magnet had a soft core and lost all of its field strength.

Afterwards, Milli-Amp tried self-induction and damaged her solenoids
and with his battery fully discharged, Micro-Farad was unable to
excite his field. Not ready to be quiescent, they spent the rest of
the evening reversing polarity and blowing each others fuses.