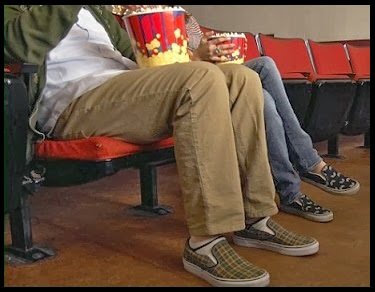 Mumbai: In a rare occurrence which can be seen only on children channels like Pogo and Cartoon Network, a college couple who bunked their lectures to watch an early morning show of the movie ‘Nagina (Bhojpuri)’, actually watched it in spite of sitting alone on the corner seats of the entire 3rd row from the screen.

It is a well known fact that ever since hotels have started demanding an identity card to rent a room or patrolling policemen suddenly shining torchlight in cars, young college couples have flocked to movie theaters to get to know each other better.

Our Samwadata Dr.Tharki Jasus with his 8 years of experience staying single in medical college and studying such couples said, “Usually the boyfriend takes the girl out on the days Vodafone and Loop Mobile offer a 1 plus 1 scheme. No sooner the lights go off after the national anthem, the heads of the couple which can be seen from the back seats usually disappear and can be visible only when the girl demands a popcorn bucket during the intermission. I wonder what the reason would be in this particular case, but I’m not fully convinced as eyewitness did not report anything about their hands.”

The theater authorities citing moral responsibility, forcefully referred them for a psychiatric evaluation to the nearby Quackdoc Multi-Specialty Hospital, even getting their 30% referral cut.

The news drew sharp criticism from other college couples who now demanded broad, reclining club seats (like in the last 2 rows) in the front 3-4 row-corner seats too.