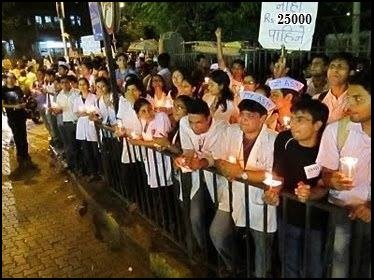 Mumbai: In an unusual incident yesterday which seems straight out of a bollywood flick, the PSM Department HOD (A self proclaimed Die Hard fan of Anil Kapoor) inspired by the movie ‘Nayak’ angrily asked an Intern to be 1 day’s HOD. The innocent intern Dr.Pranshul Kamdar, known for intelligently forging completion signatures had waited for ’15’ long minutes outside the HOD’s room in the wee working office hours.

“When I peeped inside, the HOD was combing his bald head in front of the mirror, singing and dancing to the song ‘My name is Lakhan’ which suddenly changed to ‘Munni Badnam Hui’ and he started shaking his booty. I thought he was in his jolly mood and finally after months of stealing the roster, forging signatures, I will get my signatures. Then he called me in”, said the Baby face intern Dr.Kamdar. Little did he know that the HOD was a cunning pig who blasted him for catching him unawares and asked to become 1 day’s HOD to see for himself how difficult the job was. Surprisingly, Kamdar, an old time hostel secretary and the Accounts secretary who had learned to play it dirty, gladly accepted the offer.

This news spread like wild fire and all interns were seen bursting fire crackers at LTMGH and raising Aprons on IV stands to show their solidarity. The day was declared as a holiday for the interns as Kamdar announced a stat CME on ‘PSM: Recent Advances in commode sizes’. A Lavish lunch, flowing alcohol and sexy pole dancers were called for after the CME. Some interns got their internship certificate signed for as low as Rs.500. PSM registrars and Houseman were too seen having a Kitty party at Shabri and playing bridge.

Our ‘Gupt’ Samwadata reported that the sale of condoms from the near by medical store apparently skyrocketed yesterday. PSM mamas too were seen drinking and dancing in the PSM museum. Registrars from many departments were seen sweating in the sun carrying dabbas and xeroxes for Associate Professors. Shockingly, patients in the casualty were seen putting IV lines, Ryle’s tube and Foley’s catheter on their own. Trauma patients were piled up in the store room and kept for CT scan for next day. Everyday pathetic life at LTMGH nearly came to a standstill.

While HOD’s from other Departments who joined the interns in the celebration too promised to make an intern 1 day’s HOD in future, the MUHS Director (Municipal Union of Hospital Services) ordered to set an investigating committee on the issue. PSM HOD now faces up to 100 days of internship to compensate for the loss of ’90 Intern Days’ [ 90 interns x 1day = 90 Intern days, Read Time & Work from School Text books to know more].

In an exclusive interview with The QuackDoc, the Dean of LTMMC & LTMGH Sangam commented and I quote, “Democracy has finally prevailed, Medical Colleges are of the Interns, by the Interns and for the interns.” Till the committee submits its report, Dr.Pranshul Kamdar has been requested to continue as the acting PSM HOD for now. “My next step is to get the internship stipend increased to Rs. 25000 per month”, he said.