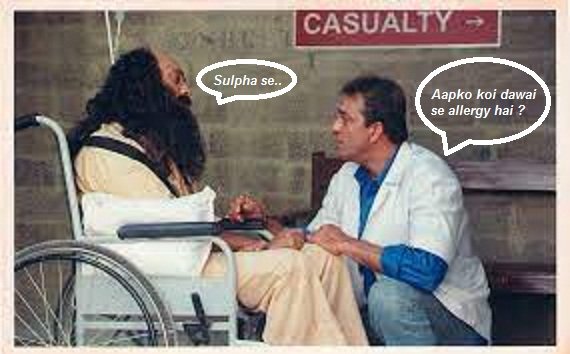 Mumbai: In a never before seen incident in the history of modern medicine, a patient was able to give name of ‘Septran’ as the Sulpha drug he was allergic to, sending shock waves among doctors and other healthcare professionals across the country.

It is a well-established fact that on being asked regarding their allergy history, most patients in India by default say ‘Sulpha Drugs’ without ever knowing a single Sulpha Drug or a history of even being prescribed one.

In an exclusive interview with the Quackdoses, Dr. Steven Johnson, famous for his syndrome and research work on ADRs (Adverse Drug Reactions) said, “Sulpha allergy has been known to run in families in India, and the secret allergic history has been passed on from generations to generations like an autosomal dominant genetic inheritance. The patient naming ‘Septran’ was at least a start, to break the taboo and tradition of patients being clueless so as to what Sulpha drugs were. Many patients when asked what symptoms they develop after taking the alleged ‘Sulpha’ drugs, the standard reply doctors get is ‘pet kharab ho jata hai’, instead of the redness, itching, hives and others. Our treating team of  doctors have decided to submit the patient as an interesting case study to journals like Lancet & the New England Journal of Medicine.”

Unconfirmed sources have now claimed that a junior resident Arun Swaminathan (name changed) who was examining another patient on the next bed almost put a rectal thermometer in the patient’s mouth, due to the shock he experienced on hearing ‘Septran’.

To reduce the risk of a litigation suit, the hospital neither confirmed nor denied the news regarding Dr. Arun’s misadventure.