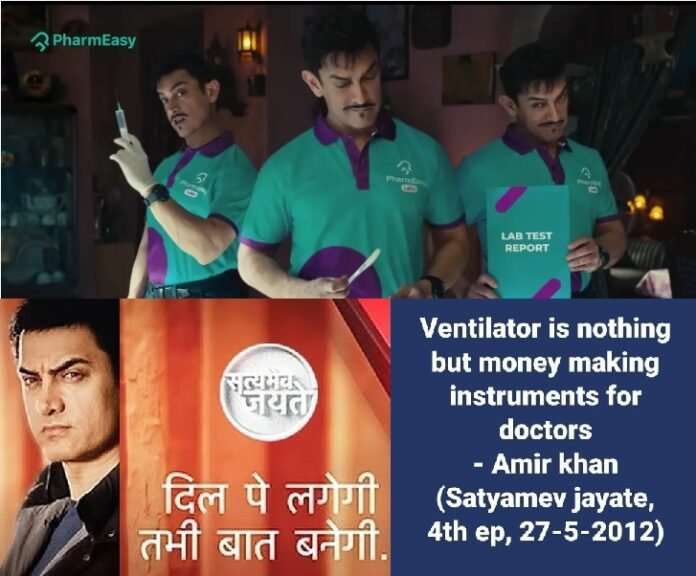 I would not like to begin this by highlighting your professional achievements (like your media dogs do) – but will come straight to the point.

I was really surprised to see you featuring on the advertisements of PharmEasy, and it suddenly hit me that you have signed up as its brand ambassador !! Wow, how shameless can you really get?

Episode after episode, season after season, you ridiculed, defamed and constantly showed in bad light on your social reforming STUNT show ‘ Satyamev Jayate’, doctors & the healthcare workers, even claiming they received kickbacks from the same pharmaceutical companies and diagnostic centres that you now chose to endorse.

Where is the intellectual actor who advocated social responsibilities and moral obligations hiding now, when doctors are making a mockery of your double standards on social media? Don’t you want to come clean or share any words of wisdom or encouragement with your half baked knowledge and selective outrage, like you did in your show?

Even during the pandemic, where had you disappeared, my friend? Enjoyed in your cosy farm house, going about with your daily life, waiting to get back to your vanity van, to be back on the big screen – while the medical fraternity around the world struggled to deal with the deadly virus. I was sad that we didn’t get to see you clapping or beating your utensils at your balcony to appreciate the healthcare workers (not that it really mattered to me).

The same healthcare workers you ridiculed on your show were the real heroes, serving the nation – Doctors, Nurses, housekeeping staff, etc along with the police and the essential service providers, who were out there – working – trying to save people’s lives – risking their own lives, working tirelessly, mostly without PPEs, without caring for their own families – the wounded healers.

Forget the appreciation that doctors and nurses deserved in times of crisis when they were the front line warriors in the pandemic, in the past too you have never ever spoken when the doctors were assaulted, nursing homes or hospitals vandalized, when Indian doctors have done breakthrough surgeries or research, when doctors have protested against the government for their rights, etc. Only your acting is an art, medical science is not?

Why? Because it will not generate TRPs, or it will not make you rich (I heard you used to charge 3 crores for 1 episode and 2 lakhs per 10 second ads of the series). Had you even thought about donating a small amount out of it when the country needed it the most? Akshay Kumar had donated Rs. 25 crore to the cause; at least Rs. 20-25 lakhs from you would not have brought down your monthly rashan budget.

Let me show you the mirror, the real “Satyamev Jayate”, from the perspective of every Doctor, Nurse, and a healthcare worker who felt offended by your comments over the years – you are nothing but an insensitive coward, a low life, self centered guy who likes to be called Mr. Perfectionist (you have never asked your media dogs to not address you as that). In your eyes, your work and profession as an actor is unparalleled, heavenly, pure and honest hard work – the rest can go f*** themselves. You are nothing but Aamir the actor, nothing more than that. A hero with no conscience. Your hypocrisy stands exposed. Shame!!

Doctors across the country are having the last laugh now, and the joke is on you !!

– From An honest, hard working, ethical, committed Emergency physician: for whom every single life matters, every single day.