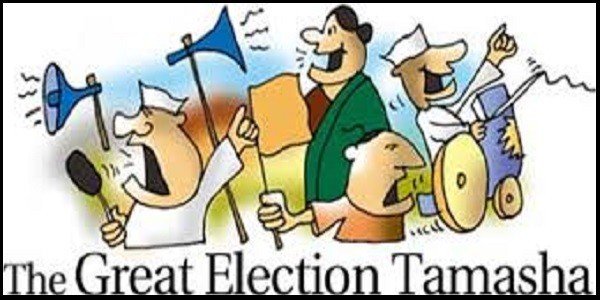 Mumbai:  With the tenure of the present LTMMC Dean Sangam coming to an end, the title race for the next Dean has sped up to alarming speeds in the last few days. Whereas the present Dean was from the Cash Section, this year’s elections will see strong contenders from other departments like Student Section, PSM Office, Library, Canteen and independent candidates like Sandeep Samosewala and our very highly qualified BCR Mch MAMA who has no time to come out of his OT changes even in his leisure time.

Since this time’s Dean will be elected by the students themselves, as part of their election campaigns, all the concerned departments have been trying to woo the students. Mrs.Inamdar, Head clerk, Student Section has announced free railway concession forms and free scholarships to all students. Also, students will not be required to pay any fine for their lost ID cards and all Official forms would be signed for free if she gets elected. She has also promised that the notorious Walkar would be obliged to sit at his chair throughout the day. On the other hand, our BCR mama has agreed to clean the whole hostel everyday and will also send free Bais to all localites for cleaning purposes. He has also promised not to ward off students studying in the BCR during the cleaning process.

But the strongest contenders at this time appear to be Mrs.Sandhya of PSM office and the Head Librarian .The Head librarian has proclaimed that students will be allowed to play songs of the Legendary Band ignition as well as other lesser known rock bands like Floyd, Metallica , Iron Maiden, etc at high volumes on Loudspeakers but has warned that anybody caught studying quietly would be punished severely. The Home lending section will actually deliver books at the doorsteps of students and then personally collect them as well. The computer room will be used for all purposes including Facebook and FIFA with immediate effect. About Mrs.Sandhya’s campaign, a very happy supporter, currently a final year medical student at LTMMC, was quoted as saying,”Mrs.Sandhya has agreed to give Internship Completion Certificate on the last day of Final Year Practical exams itself.”  This particularbrave statement on her part has brought a lot of joy among the students as they can now think of cracking PGCET in the 1st attempt, and has rocketed her prospects of becoming the next Dean.

Even after sitting on the coveted  chair for 5 long years and after plunging the college into unspeakable ‘Lows’, present Dean Sangam was quoted saying,”I have given everything under my will to this college. I would surely want to continue my good work. But if it is not to be me, I sincerely pray that I pass the baton to someone who is very responsible and intelligent.”

Whoever the next Dean is, only time will tell if they will live up to their promises. We, like you, are also looking forward to this exciting event and The QuackDoc will continue to bring you Live coverage and updates.