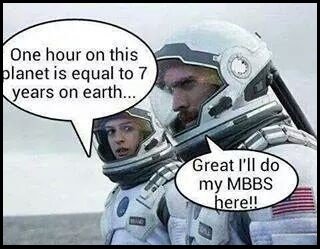 Mumbai: Doctors and students from Sion Hospital strongly came out against the proposed 1 year increase in the duration of the MBBS course being considered by the health ministry. They termed the increase in duration insufficient and inadequate, saying that longer increases were needed to maintain the quality of medical education and skills among students.

“It is important to encourage students to study further and spend time in college.” said The Quackdoc head honcho Dr.Mohit Garg, a staunch proponent of medical education. “Most students spend only 5 ½ years now which is insufficient for them to learn important skills like playing carom well and table tennis or eating 20 vada pavs a day. Most students can only spend a year or two learning these important things. In the first year, they are so scared they do not go anywhere including the library as they do not want to get ragged. In the 3rd year, they have to do extra activities like going to the wards and attending rounds which does not give them enough time to improve their carom skills. Being good carom players is an important skill to have for doctors as it teaches them effective patient batting skills. They become all-rounders.”said Dr.Garg, who is an ‘all-rounder’ himself.

Supporting Dr.Garg’s statement was the famous student, Sagar Chandekar who wholeheartedly supported the decision to increase the length of the course but said that it should be increased by at least 3-4 years. “Most of my batch mates are not yet married and I feel that increasing the course length would increase their chances of getting married. The longer they are here, the greater the chance of meeting someone and getting hitched.” Sagar, who famously had a crush on the librarian, spoke very sentimentally when he remembered past experiences and missed chances.

Even resident doctors supported the decision to increase the length of the course saying that it would give them longer to ‘train’ and ‘work with’ MBBS students. Said an orthopedic resident, speaking on condition of anonymity, “It really pains us to see all these girls join the course and then come to ortho in the 3rd year only. By the time we really get to ‘know’ them, they are at the end of their course and we have to start finding new girls to ‘train’. Increasing the course length would make it more convenient for us to ‘train’ these girls for a longer period of time. We can give them ‘hands-on’ experience.”

Dr.Garg said that the move to increase the course length was a step in the right direction and would encourage more youngsters to come into medicine. Studying in comfortable and clean college rooms, eating healthy, tasty and cheap food, learning important skills like filling patho forms and getting ragged were some of the other incentives for students to spend 10 years getting a very important degree that would give them the power and license to study for another 10 years till their super-specialization. This would ensure that they would be very experienced before they even started working and doing less important things like saving a few million lives and discovering new treatments and would know important things like patient batting, carom, table-tennis, phone-chatting and filling patho forms which form an essential part of service as a doctor. This way, he said, they would graduate with lots of knowledge, but no hair on their heads.

Whether the government decides to increase the duration remains to be seen, but it would certainly find a lot of supporters in Sion Hospital to back the measure.