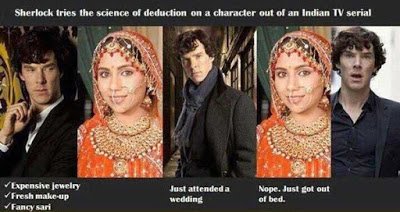 Mumbai: In a study which has perplexed neurologists and radiologists across the world, it has been found that Indian ‘Saas Bahu’ TV serial viewers suffered from early cerebral atrophy than those who did not watch, and that they are hazardous to the human brain.

In a double blinded randomized control study on the idiotic and irritating Indian TV serial viewers over 10 years, it has been found that the serials have added 0 % intellectual growth in its viewers, with shows defying all logic and have made many sane viewers go retard over time. With serials which seem to have no end but are more like ‘Draupadi ka cheer’ instead, the study concluded that India is fast slipping into becoming the greatest nation in the world when it comes to dumbness.

From Sasural Simar Ka to Saath Nibhana Saathiya to Balika Vadhu, the rotten Indian TV soap industry has now made a reputation of pretty much having the same core theme – a good for nothing husband and a powerful/cruel mother and their innocent Daughter in law; daughter in law facing all kinds of cruel treatments from the family; unbelievable number of kidnappings / injuries /divorces, etc; and the family’s favorite time pass being organization of functions every next episode with dance performances without any reason. Unconfirmed reports have claimed that even the actors of these serials laugh after watching the brainless sequences.

The Indian Neurology Society has called for a ban on these serials with legal proceedings against their directors for fooling and making people dumb. The ruling BJP government has meanwhile supported the study and claimed that Congress President Rahul Gandhi’s low IQ was also due to these serials, with mother Sonia rubbishing the claim and stating that ‘he’ was just an untimely accident.