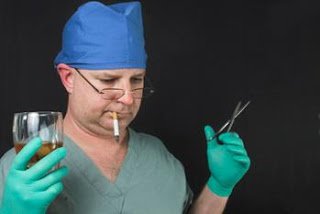 Mumbai: In a never before incident and a massive blow to the clean, bookworm reputation of LTMMC, a sting operation conducted by our ‘Gupt Sutra’ Hiranmayee Bagwe on 31st December night at the college hostel has revealed that Interns ‘actually’ partied in the premises on new year eve. It had been observed in the past few years that most Interns lied about going to a 5 star hotel or a discotheque on 31st night, but would spend the new year in the hostel room drinking ‘chai-sutta’ until now.

An average LTMMC intern would previously spend anything between Rs. 4000- 6000 per month on food (at government subsidized mess prices), PG book Xeroxes, Aprons & pens which left them with very little money to blow on girlfriends, birthday or New Year, and life would be difficult with the monthly budget already going for a toss considering the paltry Rs. 2490 they used to get earlier. Our experts have indicated that the sudden increase in stipend to almost Rs. 6500/month and rumors that the rural MO ship bond will be abolished soon had lead to the drastic worry some behavioral change among interns.

Our Quackdoses Samwadata Deepak Kumar spoke to the hostel warden Rohan Naik. “I was very happy with the lively, party atmosphere in the hostel on 31st night. It felt nice to hear some loud Marathi music, see many interns drinking & dancing in their inners in the hostel premises itself, instead of being found riding a bike on the streets of Dharavi and be brought to the hostel by local cops after being thrashed for drunken driving and showing off that they are ‘Doctors from Sion Hospital’. One of the interns even gifted me a bottle of Old Monk as a New Year gift”, he said.

Although the male interns looked happy, good looking female interns were still found to have sad faces for the 4th consecutive golden Jubilee year with no one even asking them to accompany to a disco in spite of being good baits for a free couple entry. There was also no significant increase in condom sales compared to previous years on New Year eve, our epidemiological study with the local chemists has revealed.