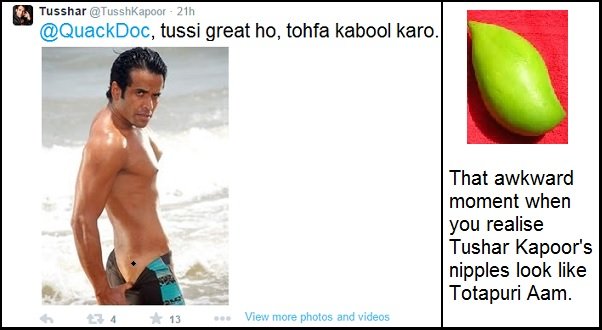 The BCG mark evidently seen on the Right buttock has become the centre of attention and has drawn huge ire from the WHO (World Health Organization) officials about the grossness in Indian Healthcare system. To add fuel to fire, the protruding nipples of the man boobs or ‘moobs’ which have been compared to ‘Totapuri Mangoes’ on social networking sites like Facebook and Twitter after the photograph went viral have highlighted the Silicone implants gone wrong in a botched up surgery conducted at LTMGH.

The photograph which has now become the centre of the storm has attracted support with Dr. Salman Butt, the Head of the QuackDoc Institute of Clinical Research claiming, “Tusshar’s butt looks better than even Kim Kardashian’s and in my opinion is ‘The perfect Ass’ for clinical trials. If Tusshar can offer his butt for research into new ways of giving injections, he would not only contribute to science but to the entire mankind, more than he would have by quitting acting”.

With the out of work Tusshar Kapoor planning to make a comeback to Bollywood  as ‘Item Girl’ soon, even Poonam Pandey and Rakhi Sawant are feeling the heat of the new degree of exposure they have to do in future to stay in the competition.

When our gupt samwadata Dr. Vipul Bothra contacted Tusshar, he stated, “It is nothing but a testosterone injection abscess scar which my Doctor Neal Shah gave me. I plan to sue him in court soon. AA E AO AEO Penchor”

A Red Corner Notice has now been issued against Dr. Neal Shah who is apparently on the run and might have escaped to the US.