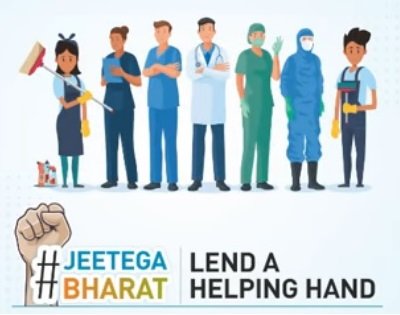 The ‘Wuhan – Chinese Virus’ pandemic is unprecedented, with its impact which has been extraordinary across the globe, including India. The danger posed by this disease is real, imminent, and something that the world has never dealt with before.

All across the world, the front line warriors against this deadly disease have been the healthcare workers (HCWs) – doctors & nurses who have been ‘selflessly’ working in this combat.

But what makes the global situation different in India is the way doctors and nurses are being treated, by the government and by the common man of the country.

Isn’t it perplexing that it did not even take hours for the ‘shameless’ general Indian population to shift gear from ‘clap mode’ to ‘slap mode’.

The news of HCWs being accused of ‘negligence’ when an elderly patient dies of the virus, being beaten on declaring death of a COVID 19 patient, being stone pelted and ‘chased out’ of resident locality while going for screening camps or to quarantine patients, to be thrown out of their rented accommodation & hostels due to the fear of being carriers, not being provided with even decent meals while actively attending to COVID positive patients, getting defamed to be the actual source of contagion for many patients in a facility, etc should really put the country to shame.

And to top it off, very less has actually been seen of the government’s ‘hollow’ actions for the front line warriors which are only on paper and in news conferences, not at the grass root level.

Is it wrong for doctors and nurses to demand PPE kits? And how does the government respond – using threats – to terminate employment contracts, or by cancelling registrations to practice medicine, or by not giving graduation degrees to interns after completion of their MBBS, and of using their last resort ‘brahmastra’ – the Essential Services Maintenance Act (ESMA) by which HCWs can be imprisoned for up to a year in case they refuse to work; and by false reassurance on national television that we are well prepared?

And to add more insult, they come up with regularly updated ‘loosened’ guidelines to reuse and sterilize the N95 masks, thereby increasing risks to the HCWs – not because the government wants you to be safe, but to make sure the we continue to work !

The official COVID 19 positive patient numbers (which have been decently low are increasing at snail’s pace) is because of the less testing available, the 40-50 % false negatives of the currently available kits, maximum cases being those with mild symptoms who are asymptomatic carriers and not being tested at all, less virulent strain of the virus in India, etc – while we HCWs are aware that the actual numbers might be 25-30 times the official numbers.

Is there any transparent explanation of the way the money donated to the government is being spent? With unspent money in millions already lying in the PM National Relief Fund, thousands of crores is received from ‘civilians’ in a separate fund and the ‘PM Cares’!

Nevertheless, I will only pray that this pandemic ends soon and normalcy is restored – because Corona or No Corona, the common Indian man’s attitude towards the medical fraternity will never change, unless the government takes stringent measures.

I would like to end this article by a poem dedicated to all healthcare workers – Head Held High.

When time tests you in its war,
People taunt you for who you are,
Things fall apart, you don’t know why,
Never look down, hold your head high.

When success evades you, failures you see,
Learn to move on, let it be,
Aim higher next time, for the limitless sky,
Never look down, hold your head high.

Every strong man is tested, before his greatness,
Accept the truth, keep the heart hate less,
We will be victorious, it sure ain’t a lie,
So never look down, and hold your head high.