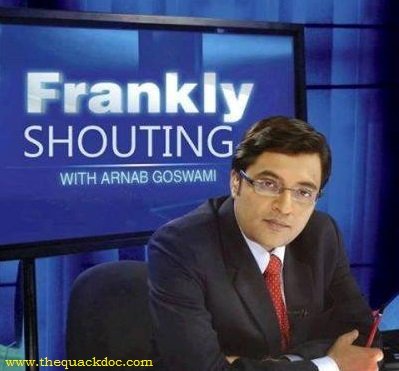 Mumbai: In a path breaking study conducted at the Quackdoc Multispecialty Hospital, Arnab Goswami, India’s most famous judge, jury and executioner for his show, the Newshour has now become the number one risk factor for hypertension in the Indian population.

The success of the show, which recently completed its 10 years on 1st February, was marred by recent reports that the ever angry and ever restless news anchor Arnab had surpassed the threats by obesity, excessive salt in diet, alcohol, low vitamin D levels and other risk factors to become the biggest threat to the morbidity and mortality of an entire nation.

The World Health Organization (WHO) had earlier predicted that by 2025, one third of the Indians would suffer from Diabetes and High blood pressure related ailments, but according to recent study, WHO has now claimed that 99.9 % of all viewers of the talk show will suffer from Hypertension by the year 2020, unless Arnab starts giving the guest panelists a chance to talk on the show.

What has baffled the researchers involved in the study even further is that the hypertension caused by watching Arnab has been found to be resistant to the standard treatment of Diuretics, ACE inhibitors, Beta blockers, Calcium channel blockers, etc and can only be treated to a certain extent by watching youtube videos of Rahul Gandhi’s speeches and of Arvind Kejriwal making his false promises and dramatic claims.

Our Gupt Samwadata spoke to Dr. Arun Swaminathan, the doctor-in-chief of the research, “The constant yelling and bickering on the show produces a stress response in the viewers, which in turn stimulates the adrenal glands to produce the fight, fright and flight hormones, namely Adrenaline, Noradrenaline and Cortisol, thereby increasing the blood pressure. It has been observed that since the debut of the show 10 years back, the number of Indians suffering from myocardial infarction, tinnitus, intracranial bleed and nightmares has doubled, with the guest panelists being the hardest hit, suffering from neurogenic bladder where they have no control on & subconsciously piss in their pants with even the thought of facing Arnab again. He is slowly becoming India’s most dreaded father-husband, and might be the only guy in the world to fight with his wife and win an argument. There was a time when kids did not drink milk and mothers used to scare them by threatening to call the police, times have now changed and mothers now threaten to call Arnab uncle instead.”

With his undeniable ability to increase urine output, research is now underway if videos of Arnab Goswami can be used to treat congestive heart failure (CHF), and whether he is more efficacious than the time tested furosemide (Lasix) & Nitroglycerine infusion. Whatever the results may be, only time will tell, but experts are skeptical of the chances of using Arnab in CHF with the counter argument that he could possibly cause a heart attack first.