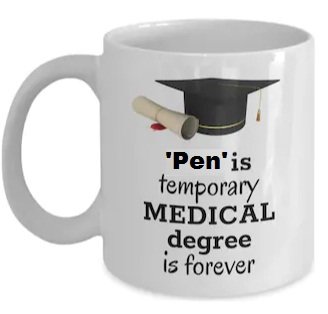 Mumbai: In a never before incident in the history of modern medicine, a doctor was spot diagnosed with encephalitis after presenting with the ultimate sign of brain damage when he returned a pen to the nurse. The news has sent shock waves across the medical fraternity.

It is a well-known fact that most doctors never carry their own pen and end up borrowing one from their nurses to put patient notes. On most occasions, doctors pocket the pen, knowingly or unknowingly, and often forget or misplace pens in wards, patient rooms, operating theater, patient’s abdomen or anus but never return them to anyone.

In an exclusive interview with the Quackdoses, Sister Pen-de, the nurse who was felicitated with the clinical acumen award for making this spot diagnosis of encephalitis said, “Doctors get this habit of borrowing pens from nurses right from their internship days. I was in utter disbelief and shock when the doctor came back and handed over my pen back to me. In all my years, I have shouted at and been shouted by many doctors but I have never seen them return a pen. That contributed to making the diagnosis as I knew he was in altered sensorium.”

Unconfirmed sources have claimed that Sister Pende is hopeful to spot diagnose her second case of encephalitis, and is now waiting for another doctor to return the stethoscope borrowed from the nursing counter.