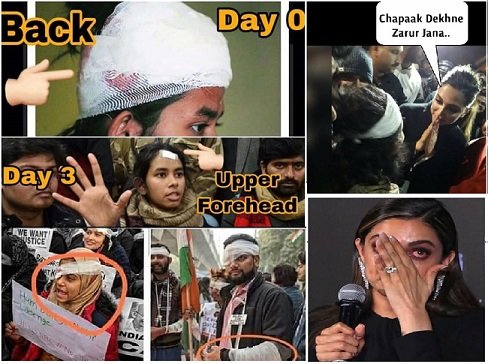 New Delhi – A day after being slammed on social media for going to Jawaharlal Nehru University (JNU) amidst the ongoing turmoil to promote her new movie Chhapaak, Deepika Padukone has clarified that she only expressed solidarity with the students after realizing that JNU students studied even more than allopathic doctors.

In an exclusive interview with the Quackdoses, Dippy said, “I had gone to my doctor for some ladies problem after which he said I will need a PR. I googled PR and it connected me to a Public Relations agency in Delhi which told me that JNU was ‘the’ place for publicity stunt and making money as producer. It was only after reaching there did I realize that doctors only falsely sulked for having to study 10-12 years, while most JNU students studied in the same university for more than 20 years. Aap chronology samjhiye…”

The Indian Medicos Association (IMA) issued a strongly worded statement condemning her remarks, and questioned whether the JNU students were treated by Quacks or Deepika’s make up artist. Images of university students with dressings over Hijab / jacket, and blood soakage of dressing roll far away from alleged injury site have gone viral over medical groups.

Unconfirmed sources have claimed that after watching her crocodile tears at the launch of the trailer of Chhapaak, Joaquin Phoenix who won the Best Actor award for Joker at Golden Globes 2020 recently has decided relinquish the trophy to Deepika.