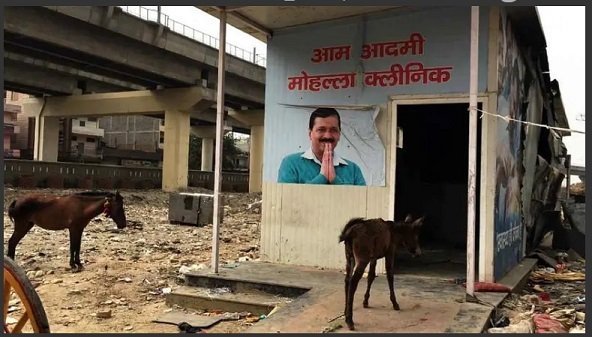 New Delhi: Delhi Chief Minister and AAP national convenor Arvind Kejriwal on Sunday guaranteed job placements in John Hopkins, Cleveland Clinic and Mayo clinic for doctors working in the much hyped & scam tainted mohalla Clinics, as he released a “guarantee card” listing 10 promises that AAP will deliver on if it is elected to rule Delhi again.

The ‘Kejriwal ka Guarantee Card‘ was released by the Chief Minister at the Aam Aadmi Party office here and included promises of job placement to the premier hospitals for doctors working at the mohalla Clinics, who gradually become experts in making ‘false entries’ of patients, giving them useless medications to ensure revisits, and ‘good incomes’ for themselves.

In an exclusive interview with the Quackdoses, Kejriwal said, “Though most of the mohalla Clinics are ailing themselves, have become dysfunctional, are a total waste of public money with locals using the space as garbage dumping site, and are frequented by goons and drug addicts, I am assuring that the international job placement of mohalla Clinic doctors that we announced in this tenure will continue in the next five years. These are big guarantees and will take time to be implemented.”

Kejriwal also signed the card after announcing the guarantees, saying “he will fulfill these promises in the next five years”, a claim downplayed by BJP with the rebuttal that the Kejriwal government had earlier too promised to establish 1,000 mohalla clinics in Delhi, but not even 200 clinics were opened over the last 5 years.