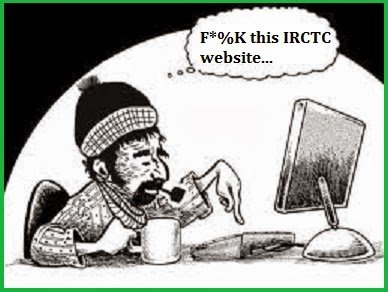 Mumbai: A day after Indian Railway Catering and Tourism Corporation (IRCTC) launched an online booking facility for retiring rooms at railway stations, a man from Mumbai, Chukchuk Prasad ‘retired hurt’ with pain in his fingers, neck, back and bums after sitting for 10 hours continuously in front of his laptop, but yet failing to book his accommodation through the IRCTC website.
The news which has spread like wild fire among the already angry railway passengers owing to the slow website server during Tatkal bookings and unproved allegations of IRCTC’s setting with agents, has exposed another lie of the Indian railways that tech-savvy railway passengers could find accommodation in retiring rooms at the click of a button.

The ‘retired hurt’ passenger was taken to the emergency department of the Quackdoses Multi-Specialty Hospital where a medico-legal case (MLC) was filed against IRCTC and the patient was admitted in the ICU for observation where he is said to be stable. The police department has meanwhile started investigations, but they are not too hopeful as Mr. Prasad couldn’t come up with any details except for how many times IRCTC returned “Service Unavailable” error.

In a statement to our Faking News Samwadata, Chukchup Prasad said, “The website claimed that any railway passenger with a PNR of a confirmed or RAC ticket can make an online booking of a retiring Room. I was somehow successful to get a confirmed ticket from Borivali to Churchgate, but when I made the payment of Rs. 20 for my 24 hour stay in the retiring room at CST, I never got my confirmation receipt even after trying multiple times for almost 10 hours. I wonder if I will ever get back my refund.”

There seems to be no break through in sight as there is now a dispute over whether the case falls under the jurisdiction of local police or the Railway police.