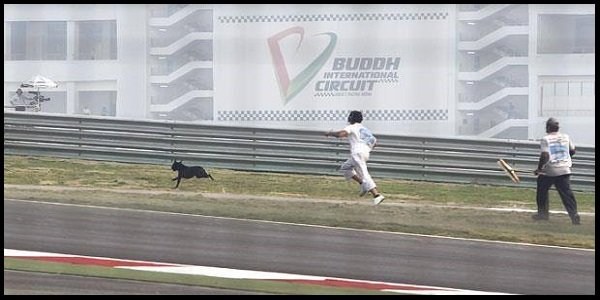 Noida (U.P)–  In a shocking incident to highlight the plight of the stray dogs, a local bitch Chammak Chaloo jumped the security barricades during practice run at the newly built Budh International Circuit. While running on the track at 350 km/hr, she barked in protest accusing the Mayawati Government of wrongfully encroaching their land. No sooner did the organizers realize the intrusion, they asked the safely car to be deployed with Micheal Schumacher at the drivers seat to try and persuade the bitch for an under the table settlement which he refused to oblige saying,”I will never be able to overtake the bitch on her home circuit”. The organizers then announced through the camera crew helicopter that the bitch will be given a bone signed by all drivers but she did not stop running saying she wants to first set the lap record. She barked that no one should try to stop her otherwise she will sit on a hunger strike in the Pit Lane.

With no option left, Ra-One and G-one were called from a nearby theater with a lot of persuasion to team up and stop the bitch from running amok. She could only be caught when she stopped to pee in the typical ‘raising the 1 leg doggie position’ at a pole near the finish line. Shah Rukh Khan reportedly pocketed a cool 5 crores for it and a chance to climb on stage with Lady Gaga to persuade that bitch to be his Chammak Challo.When Mayawati was asked why such a shameful incident had happened, she said “It is a conspiracy of Rahul Gandhi’s puppy to malign the peace in the state. I request the centre to order a CBI probe” Her comments have raised eyebrows in the stray dog community and who came out in large numbers demanding the immediate release of Chammak Challo.

Hearing the reports of such security breach, Metallica, the world famous rock band decided to postpone their concert which was to be held at Gurgaon till the matter is not resolved. This had the fans fuming who set fire to any stray dog and bitch they could get hold of and the army had to be called in to stop them. PETA has strongly criticized this heinous act and asked the Prime Minister to intervene in the matter.

The incident today has already raised the entertainment bar of F1 as a sport and  fans around the world are excited to see more unexpected entertainment. The circuit gets applause or not remains to be seen but Chammak Chalo has definately become an overnight sensation with almost 2 million hits on her official You tube channel already. Before printing,there were unconfirmed reports that the organizers have decided that the winner’s trophy will be handed over by Chammak Challo herself.