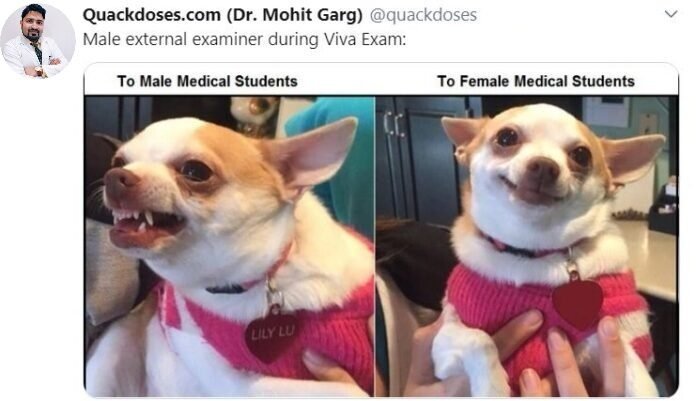 Mumbai: In an incident which has captured the imagination of medical students across the country, an anatomy external examiner was left stunned when a 1st year MBBS student during the viva exam picked a biscuit from his plate, instead of a bone.

Medical viva exams have a long history of being surrounded in controversy every year, with male students often accusing male external examiners of being partial towards females. The most famous & controversial viva incident was with a 1st year female student recently who was shown a uterus specimen and asked to identify it. When she was unable to do so, the male examiner gave her a hint that neither he, not her boyfriend had it. In spite of answering ‘brain’, she still surprisingly managed to top the university exam, for which she credited the prayers she performed the night before the exam.

In an exclusive interview with the Quackdoses, Dr. Kabhi Matbann ⟨™⟩, who is now being hailed as a future surgeon said, “On the 1st viva table, the examiner asked me to identify someone’s balls hanging from a forceps. When I answered that it was a ‘male testicle’, he annoyingly shouted back asking if I had ever seen ‘female testicle’. It made me so nervous and scared that I became Anand bhai of Munnabhai MBBS for the rest of the viva. On the 2nd exam table, when the external examiner asked me to ‘pick anything’, how was I supposed to guess that he meant a bone. Surprisingly, he did not ask me anything after I picked the Parle-G biscuit from his plate. Unfortunately, I had nothing to tell to my batch mates when I emerged from the exam room and they surrounded me to ask ‘Kya Pucha, Kya Pucha’.”

Taking cue from this incident and avoid similar embarrassment, the Pathology Examiner’s Association has summoned its members to not offer students to ‘pick anything’ from the table during the viva exams, but instead personally hand over the formalin filled organ specimen jar to describe.