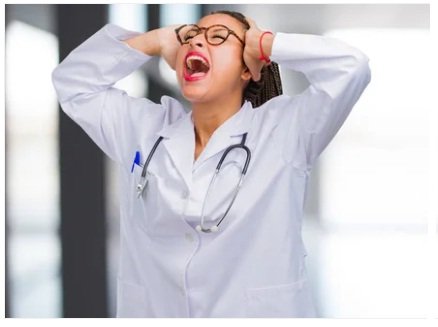 Mumbai: In a never before incident in the history of medicine, a patient had to face the wrath of a female medical intern’s anger after her relatives continuously addressed her as ‘shister’. In retaliation, the irate intern refused to catheterize the patient and to deliver the blood samples to the laboratory, for the patient who was posed for an emergency C-Section.

The unfortunate incident happened in the obstetric ward at the Quackdoses Multispeciality Hospital. It was only when the panicked houseman and registrar assured the intern that they will pay the arrears for all the tea-breakfast she had bought for the unit during her internship posting, did the young doctor calm down and agreed to not put her phone on flight mode the next day.

In an exclusive interview with us, the intern Dr. K’abhi Matbann ⟨™⟩ said, “I have lost count of how many times I was referred to as the ‘Khoon nikalne wali doctor’ by patient’s relatives while I was posted in medicine ward. The tone in which the relative said, “Ae shister, injection khatam ho gaya hai”, activated the fight-fright-flight mechanism of my sympathetic system, since it felt similar to stingingly being called ‘Auntie’ by people who are older than me. Why are the male co-interns wearing aprons not called by patients as mamas or technicians? Till when can we be immune to this inequality?”

Unconfirmed sources have claimed that after getting inspired by the courage of Dr. Matbann, the Obg-Gyn society of India has now launched a social media campaign to spread awareness for people to address them as Obstetricians or Gynecologists, and not ‘lady doctors’.