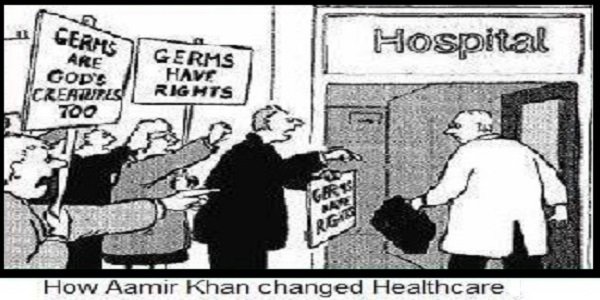 Mumbai: In a major setback for Aamir Khan who is currently in the news for the new season of his show ‘Satyamev Jayate’, media pundits have revealed that he is gradually becoming the new laughing stock like Rahul Gandhi and Alia Bhatt after the 1st episode which featured those shameless people who do not drink but always finish the ‘Chakna’.

It has been seen that the popular show which features not-so-true dramatizations with its sensational pauses, exaggerated viewpoints and pointless rounds of applause on topics mostly pertaining to discrepancies in the healthcare industry has finally come of age and has become bold enough to address the real issues plaguing the society.

Our Gupt Sutra spoke to Dr. Nayan Ghosh, a famous columnist for a leading health magazine who said, “It is bad to drink on an empty stomach. The Moong Dal, Masala Peanuts, Sev Bhujia, boiled Chana, etc aid in digestion and helps counteract the female hormones in alcohol, which after drinking, make men talk unnecessarily, become emotional, drive badly, stop thinking and fight for nothing. The show is really a boon to society for highlighting the sorry plight of people fed up of their non drinker friends who blatantly finish the Chakna.”

The changed mood of doctors towards the actor is in sharp contrast to the previous view of the fraternity which felt that the show with its just 12th pass host Aamir Khan was biased and targeted the health care industry by showing doctors (who spent half their life studying) in bad light. It also never mentioned about the dark side of Bollywood including the casting couch, the unspoken infidelity of actors, Aamir’s illegitimate child with British reporter Jessica Hines, etc.

Our sources have revealed that the next episode on the show will feature life in college hostels and how a friend with weed, is the true friend indeed.