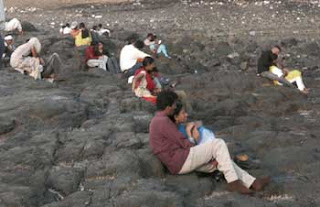 The vast ocean, the sound of the waves as they rise and fall and the cool breeze have always had a calming influence on me….I often go to the beach alone whenever I feel low, confused or when I have to take a major decision in life….For me, nothing comes close to a walk down ‘Marine Drive’ or sitting alone on the rocks at ‘Bandstand’ looking at the vastness of the ocean.
For years, Bandstand has been my favorite hangout place in the city……I have been there innumerable times before, alone and many a times with my best friends from college….My keen observation of the rocky terrain at Bandstand all these years has made me inclined towards the ‘Kekdas’ we see hidden in the crevices or somewhere behind the rocks…..Here is my case study report :-
The Kekda’s are always found in a pair (hence the name Kekda Couples). They usually prefer to hide behind rocks by which they will be hidden from the view of the general public…Their specie is peace loving, usually minding their own business….They know their territory well, so they often end up swarming a particular patch of rocks and can be seen sitting in a straight line….Majority of them are youngsters who bunk lectures from college or classes to manage time for the ‘Non Committed Timepass Relationships’.
There, they sit for hours together having ‘False Dreams’ of spending their lives together….One can usually find them lost in each other’s eyes, sometimes getting intimate….smooching…A real treat for the ‘ Less Fortunate’ of similar specie who get excited to spot these kekda’s like a scientist would on making a new discovery. To prevent themselves from being seen, the Kekda’s usually carry a protective shell called an ‘Umbrella’ which is used even when the skies are very clear and there is no sign of a single raindrop….a ‘dupatta’ too serves as a good substitute at times.
All is not always happy when they think that they are having the best romantic time together….The ‘ Less Fortunate’ who mostly envy the ‘lucky’ couple pass lewd comments, the cold drink – chanewale vendors too try their best to disturb them purposely…..In recent times, the Kekda couples felt harassed by Eunuchs so much so that their count had decreased drastically sending shockwaves among others wanting to make Bandstand their favorite holiday destination…..sometimes, when the act of intimacy crosses the limit of decency, it becomes a nuisance to the locals who call the police to break the Lip lock…..sorry deadlock 😉
We friends, often tease each other that when one of us gets mutated to their kind soon, he would forget the years of friendship and would for sure be found sitting somewhere behind the same rocks of Bandstand one day….but the fact remains, each one of ‘The Unfortunate’ – including me, always surely ponder looking at the happy couple…….. “Mera number Kab aayega”.