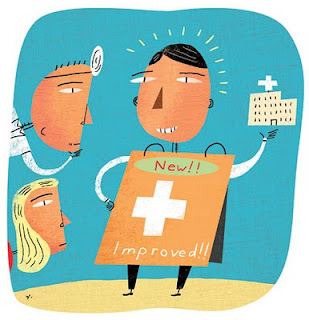 Since an intern has no work in the OPD apart from filling the forms, writing the history and sending the patient to a real doctor, I decided to observe a group of people who regularly visit us on all OPD days…They are usually seen in groups, anything between 5 to 25 and would be for sure the most patient of all people I can see in the hospital everyday…They are used to spending hours waiting in the OPD, usually talking crap about the doctor they will be meeting in a few hours and then greeting the same doctor with a smile and free gifts for being so kind to them…The waiting period is not so boring as they do check out the other beautiful gender of their same species sent as baits by pharmaceutical companies….Yes, you’ve guessed it right….This article is dedicated to our dear friends whom we don’t want to meet during OPD hours, unless they come with a nice gift apart from a 2 rupee pen in a 5 rupee box…. Their designations may be business executives, product detail men or territory sales executives, but in common parlance they are the heavy-medicine-bag-toting MRs (Medical representatives)….

The OPD notice board says NO MRs TILL 12:30 PM and yet they arrive before the patients do in the morning….Suddenly they enter our room, dodging the mama and place on our already full table a piece of advertisement paper, a free pen garnished with free samples, say something so quickly, I can hardly make out at times and leave in a hurry too…. Most of them are under-informed about their products, one question to them and they go blank like we do during our viva exams….In the OPD, the residents are also not so clean…hardly they make an eye contact with a male MR and just nod their heads while the MR recites his “rata hua rhyme”, to make an impression that they are listening….But due to acute shortage of good looking female doctors/Interns/students in Sion hospital, they cannot stop themselves from at least checking out and listening to a pretty female MR on hearing a sweet voice while writing the history…

It so happened that once while I was loitering towards the MICU, I heard someone call me from behind…I turned back to see a person, nicely dressed in a tie whom I had never seen in my life before…”Sir, I have something for you”, he said as he opened his treasure vault….I peeped inside to see letter pads, small utensils, paper weights, etc…I said I want none…Yet he quickly took out a cheap pen…and said, “RABECIP and PAN….please prescribe….” I smiled to myself and left without entertaining him…Since then, I decided to keep a close watch on such funny kinds…

On the last OPD day of my medicine posting, the senior resident did not come…It was left to the housie and me to manage the entire 4 hours of the OPD…Last 2-3 patients when the housie too left I was left alone in the room….Suddenly I found myself surrounded by more than 20 MRs ready to pounce on me with their product catalogue as their claws…Main toh apni izzat bachake bhaag gaya….he he..

Its not that we as doctors don’t care about our dear friends(sarcasm)…When ever we need medicine for ourselves, we do ACT to be friendly while tracking the familiar face we might have seen in the OPD….Also, when ever the college needs sponsorship to hold CMEs, hardly it is possible without the MRs…During lunch too, someone is required to make sure the doctors are taken good care of and the MRs fit the job perfectly as waiters…They also give evidence of primitive smartness when after the ban by MCI on gifts costing more than Rs.1000 for doctors, they started getting stuff with MRP. of Rs.999 for senior doctors..lols

It has been only 2.5 months that I’ve been keeping an eye on them…Looking forward to new encounters with this specie Medical representatives in future and I hope THE FRIENDSHIP ONLY GROWS (pun intended)….After all who doesn’t like to be pampered with free gifts (a pen is a gift for an intern because even if you don’t have a stethoscope, one can be called an intern if he/she is wearing a dirty ink stained apron and has a PEN) for just being who you are…a doctor !!