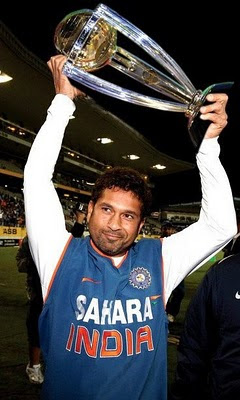 NOTE– NOT AN ORIGINAL PIECE OF WORK…. The Following are few of the best quotes about the genius…the Little Master…the Master Blaster….undoubtedly the most loved Indian…. SACHIN RAMESH TENDULKAR.

Mark Taylor(Aus)
”We did not lose to a team called India, we lost to a man called Sachin”

Brian Lara(WI)
“I want my son to become Sachin Tendulkar…..Sachin is a genius, I am a mere Mortal.”

Hashim Amla(SA)
‘Nothing bad can happen to us if we were on a plane in India with Sachin Tendulkar on it.”

Waqar Younis(Pak)”He can play that leg glance with a walking stick also.

Andy Flower(ZIM)”There are 2 kind of batsman in the world. 1 Sachin Tendulkar and 2. all the others .

Matthew Hayden(AUS.)“I have seen God. He bats at no.4 for India in tests.

Don Bradman(AUS)
“I see myself when I see Sachin batting.

Australian Fan
“Do your crime when Sachin is batting, because even God is busy watching his batting.

BBC Sports
Beneath the helmet, under that unruly curly hair, inside the cranium, there is something we don’t know, something beyond scientific measure. Something that allows him to soar, to roam a territory of sport that, forget us, even those who are gifted enough to play alongside him cannot even fathom. When he goes out to bat, people switch on their television sets and switch off their lives.

Shane Warne
I’ll be going to bed having nightmares of Sachin just running down the wicket and belting me back over the head for six. He was unstoppable. I don’t think anyone, apart from Don Bradman, is in the same class as Sachin Tendulkar. He is just an amazing player.

Anil Kumble
“I am fortunate that I’ve to bowl at him only in the nets!”

Andrew Symonds
“To Sachin, the man we all want to be”
What Symonds wrote on an Aussie t-shirt he autographed specially for Sachin.

Peter Roebuck
“On a train from Shimla to Delhi, there was a halt in one of the stations. The train stopped by for few minutes as usual. Sachin was nearing century, batting on 98. The passengers, railway officials, everyone on the train waited for Sachin to complete the century. This Genius can stop time in India!!”

Brett Lee
You might pitch a ball on the off stump and think you have bowled a good ball and he walks across and hits it for two behind midwicket. His bat looks so heavy but he just waves it around like it’s a toothpick.

Steve Waugh
It was one of the greatest innings I have ever seen. There is no shame being beaten by such a great player, Sachin is perhaps only next to the Don.

Michael Kasprowicz
Don’t bowl him bad balls, he hits the good ones for fours.

Greg Chappell
He is a perfectly balanced batsman and knows perfectly well when to attack and when to play defensive cricket. He has developed the ability to treat bowlers all over the world with contempt and can destroy any attack with utmost ease.

Barack Obama – “I don’t know about cricket but still I watch cricket to see Sachin play..Not b’coz I love his play its because I want to know the reason why my country’s production goes down by 5 percent when he’s in batting”…