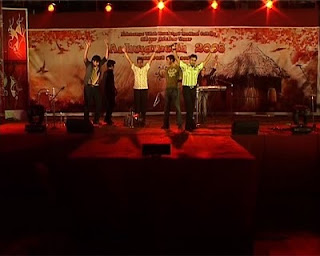 It was a cold Saturday night which had just changed our lives……a story which began with Me , Anand and Neal ,THE STORY OF BAND IGNITION……

I got a call from Neal on Friday evening ,he sounded enlightened when he spoke of realizing the bitter truths of life, the real faces of people ,the back bitching ,etc……motive was to get a break from the mirage of life.Im sure he would’nt have found a better person than the POSITIVE ENERGY POWERHOUSE ,that’s me (ha ha) to discuss such issues. .Even I was looking forward to a break after my dad’s surgery and the tough period I had gone through so called him over for dinner the next day .My next call went straight to Anand who was under the burden of some false allegations of which I’m not really sure of giving him a clean chit(joking nana)….he denied to come at first because of not being in a stable state of mind, but we were happy to get a call from him on Saturday at 5:00 pm that he really wants to come over.

We all met up, had dinner ……relaxed…..it was 10:00 pm by then .We then came upstairs to my room ,talked a lot of senti stuff….truths of life….etc. The mood was getting a bit depressing when I decided to show them my poems which I had recently written…Anand had my guitar in his hands, he was ramdomly strumming its strings…Neal reading aloud my poem “Mirror of my life”..and me enjoying the refreshing atmosphere.

Suddenly the God of muzik struck us. A tune came into Neal’s head and he asked Anand to play it(he can play a little bit of guitar…ha ha).Neal sang that poem’s first two lines like a song and here was the beginning of our night to remember .Every 5 minutes Neal could be seen running around my drawing room with ears closed thinking of the next line’s tune while Anand perfected the earlier lines and I made a few changes in the lyrics here and there….We were muzik struck completely ,Composing the entire song took us 6 hrs and we really did’nt realize how time went by and it was 4 am by then .At that time none of us had any words for what we had accomplished .Not wanting to, but we then went to sleep.

Next day, after the breakfast we did try to study a bit…..each of us sat in a different room but none of us had anything going in to our heads .We wanted to only compose some great muzik that day and at once jumped back to do that…..by around 6:00 pm Sunday ,we had managed to compose 3 original songs….all done.

What a time we had had those two days……its so very difficult to put them in words right now…..it was such a great feeling , we were on such a high …our mind was into muzik so much that we couldn’t think of anything else except our songs which I suppose were on autoplay in our heads and did not have a stop button .Each one of us had lost our concentration towards medicine and each one of us just wanted to be a ROCKSTAR.(don’t deny it guyz).Somehow we came over it but the hangover remained for the next two days…

Wednesday, I got a message from anand, “ Dude, how nice it would be to see tears in people’s eyes after treating a patient that to see people cry listening to our muzik .How about being a ROCKTOR ? “…………That was the original name of our so called band THE ROCKTORS.

Our college fest was coming close and we thought of performing there….we approached a few people who joined in and left us in between for good actually.Finally we did manage to get the right people and by then Suchitra ,Vidhur and Rahul had joined us and together we formed BANG IGNITION.

All the time of practicing , arguing ,fighting and pulling each others leg was a time to remember(what say guyz ? )…..then we got the big news, a chance to perform on stage.

Band Ignition really rocked that night at college fest and people could’nt stop talking about our great performance that evening.

Looking at the videos today,I do realize I might not have looked that great on stage that day being a host and standing there and clapping but what really cheers me is that when I introduced the band members , me being the last…..Maximum clapping and shouting were for me when I announced that I was the lyricist of the songs we performed….may be those claps will continue to encourage me to pen down more great songs in the future…Rest all is history.